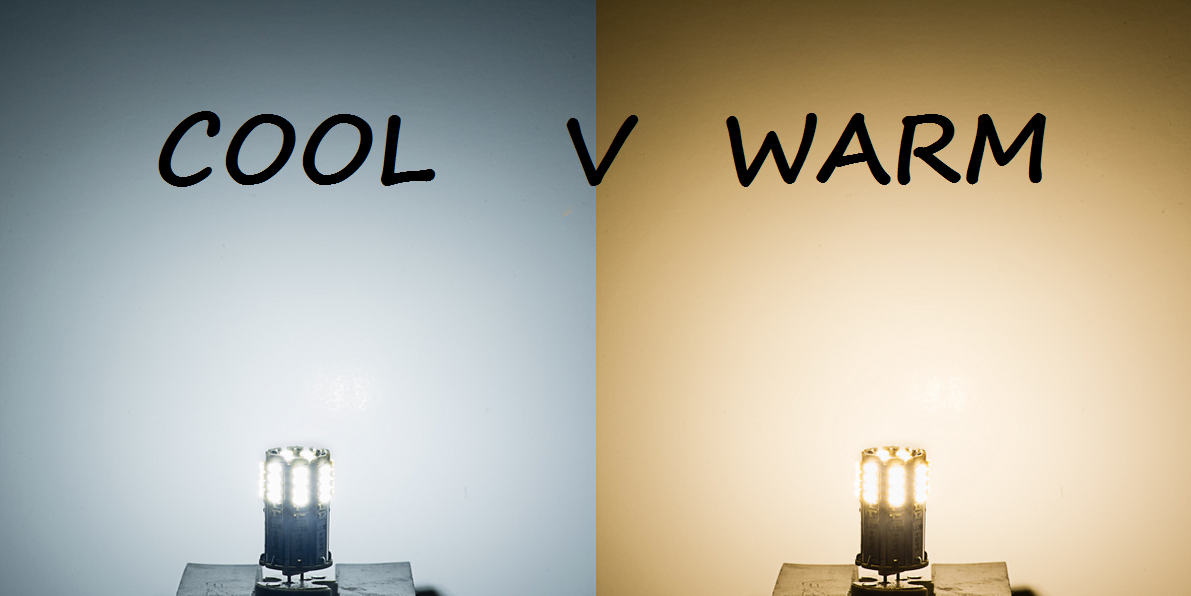 We need light bulbs for artificial light but deciding what kind of colour temperature to emit can sometimes be a head-scratch moment. Although you can buy daylight and natural light bulbs which are relatively new to the market, the main two contenders battling it out for a spot in most light fixtures are cool white and warm white bulbs. A difference in colour means that these bulbs are often used in opposing rooms with cool whites comfortable in bathrooms and kitchens, whereas warm whites are homed within living rooms and bedrooms.

The reason that cool and warm white light bulbs are designated into different locations is down to the feelings they produce. Cool white is described as a bluey white that delivers a clear and clean glow, with warm white emitting a yellowy glow for a softer and more relaxing warmer tone. The crispness of cool white light bulbs makes them a desirable choice for kitchens, bathrooms, hospitals and commercial retail stores that require a pure and clinical look. On the contrary, warm white bulbs are perfect for domestic rooms that wish to create a calming and homely ambience.

How Are Cool & Warm Bulbs Addressed?

To understand what separates a cool and a warm white bulb you’ll need to focus on the bulbs temperature which is measured in kelvins (K). The temperature of the bulb does not represent how hot or cold the bulb will get but instead how intense or weak the colour is. The kelvin score ranges from 1000k – 10,000k with the lowest being the warmest and the highest being the coolest. Below is a graph demonstrating the kelvin scale in more detail.

How LEDs Opened The Door For Different Whites

Before LEDs were invented halogen, fluorescent and incandescent bulbs were dominating the light bulb market. Despite their lengthy reign they are limited in terms of the colour they can emit – generally a yellow white. However, LEDs work differently than traditional bulbs; traditional bulbs use passing electricity through a wire which glows hot to produce a light, whereas LEDs use a completely different technology which is able to alter colour temperatures (kelvins). LEDs can now give owners the choice of a variety of ‘white’ types including warm, cool, natural and daylight.

So How Do You Decide What White You Need?

Three quarters of domestic households buy warm white LED bulbs because they match the yellowy glow of traditional incandescents and halogens. However cool white bulbs are considered to work better with bold and primary colours as well as white interior themes because cool white beams can complement a clean and minimal look; a common design trait for modern abodes. Mixing cool and warm white bulbs in the same room can also be achieved, especially in the kitchen where warm yellow glows are used in the daytime but at night time under cabinets or shelving can be enhanced with cool white lights after the warm whites are switched off.

On a commercial level retail stores tend to use cool white bulbs to create a clearer and brighter atmosphere for shoppers. Display cabinets and lighting panels are often teamed with a clean bluish light, however the colour temperature shouldn’t be too high (too cool) because it’s susceptible in turning too harsh and bright on the eye.

If you’re interested in reducing energy whilst also emitting a customised glow you should take a browse throughout our entire range of LED light bulbs. Each section will come with the option of cool or warm white beams, with additional choices also available including daylight and natural glows.