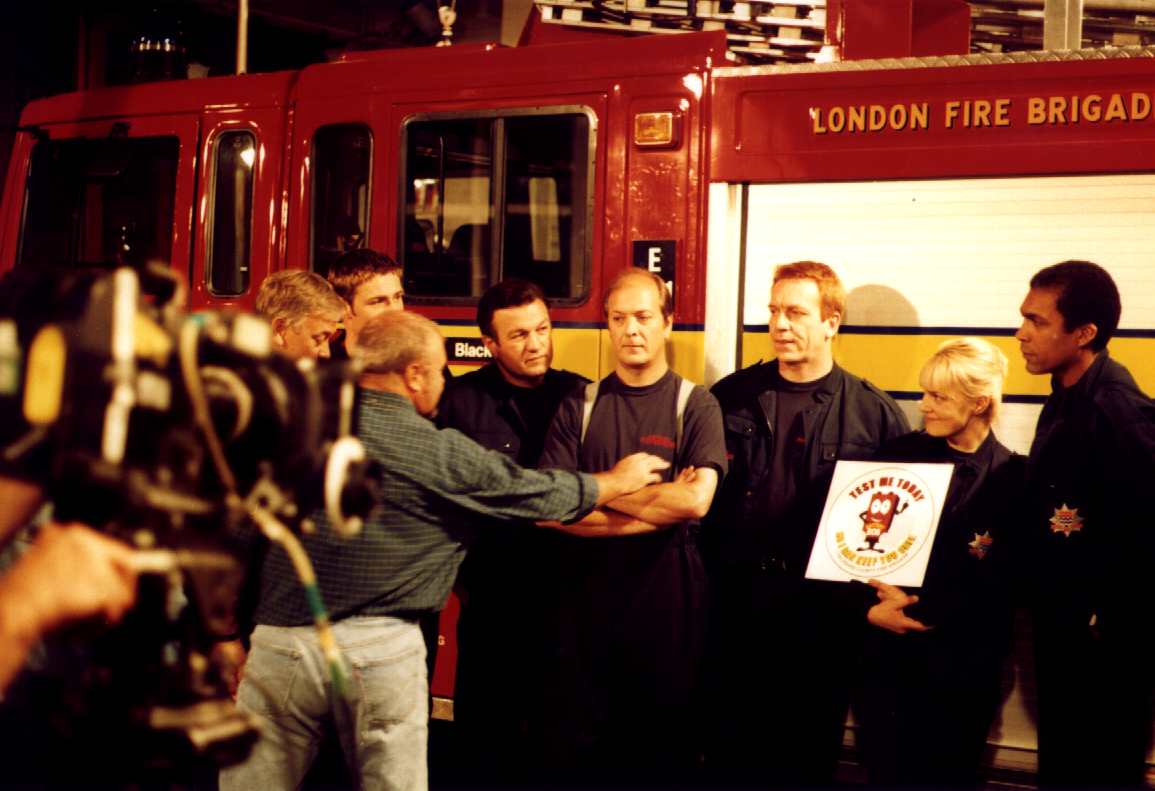 Using His Own Experience As A Firefighter To Extinguish The Danger For Businesses & Homes.

Just like any profession where you relay advice or conduct training it’s always a bonus when the person advising has been there, done it and worn the uniform. This week we’ve turned up the heat with Bob Parkin, former fireman-evolved-fire safety consultant. Bob has climbed ladders, saved lives and experienced explosions during his time as a fireman. He moved from his position as a regular firefighter to a leading fireman and shortly after worked as a sub officer for various fire stations in East Lancashire.

Replacing the resistant fireman suit with everyday clobber Bob now uses his first hand expertise to benefit others. He now acts as a consultant for both businesses and home-owners, with his company ‘Marsden Fire Safety’ offering people extra guidance and advice regarding fire safety. He works closely with a whole range of people; from interior designers and architects who sketch out building plans, he audits building layouts for big business brands and provides knowledgeable services for home-owners who need further information or help on domestic fire safety.

Fire safety is not to be snubbed at, every one of us needs to be best prepared for the unfortunate event of a fire. Some people have an obligation to meet certain fire safety standards; businesses with employees, hospitality venues and landlords renting out accommodation – all require strict regulations to be met. The other category is the average home-owner, whether a single bachelor or a busy family home, the implementation and maintenance of fire safety systems should always be considered as a top priority. So to hear it from the man himself, we welcome Bob Parkin to the Direct Trade Supplies blog page to supply a much needed insight into fire safety.

Can you tell us a bit about your past and how you ended up becoming a fire safety consultant?

I started my working life as an engineer serving my apprenticeship at Rolls-Royce Barnoldswick. To cut a long story short, I got fed up with engineering and joined the Fire Brigade. It was the best decision I’ve ever made!

The name ‘Marsden’ was suggested by my wife Diane. The town where I live used to be called ‘Marsden’ but the name was changed over 100 years ago to Nelson (after the Admiral). There are several ‘Marsden’s’ in the area, such as Marsden Building Society.

What services do you and your consultancy team provide?

I do quite a lot of work for architects and building developers in relation to building regulations. Very often people want their homes designed in such a way that they can’t get approval e.g. open plan accommodation. I can very often achieve their design by adding some additional fire safety measures.

Who are your usual customers?

Our customer base is extremely diverse. We have sold equipment to the Royal palaces, MOD, Williams F1 and many other prestigious organisations. On the consultancy side, we deal with various industries, architects and building designers, hoteliers and uncle Tom Cobley and all.

Are there any success stories that you’d like to highlight?

Working as a firefighter can sometimes be very rewarding, but on other occasions heartbreaking. I have seen the effects of fire and its ruthless ravages of people and property. It’s a bit of a rollercoaster of emotions, some high and some low.

I once had an idea to encourage people to check their smoke alarms so I contacted the local newspaper and together we started a campaign. The paper’s editor thought we needed a cartoon character that they could print on the front page of the paper after the 1st of every month with a reminder for the public to check their smoke alarms. Their artist came up with a character based on a battery with a head, arms and legs; they christened it ‘Battery Bob’.

The campaign went well locally and was soon adopted throughout Lancashire, with several local news papers printing the character each month. Battery Bob almost went national, scoring highly in a national fire safety competition; however he was beaten at the winning post! We tried to get the Coronation Street cast to publicise and back Battery Bob but nothing materialised, however London Burning cast were very helpful and ended up fighting the cause.

I think the pinnacle of my career was during my time as an instructor when I carried out a series of ‘hydrocarbon firefighting’ training courses for in-service officers. I had some extremely positive feedback from very experienced officers of higher rank than myself, it was an accolade from my peers which gave me great satisfaction.

Since setting up as a consultant, I have appeared on television (BBC news) and I’ve been interviewed several times on radio, including twice on the Jeremy Vine show.

We heard that you are also an author of a book, can you tell us a little bit about that?

Yes that’s right, although slightly inadvertently. Nobody knew when the Nelson Fire Brigade actually formed, at the time the Home Office were in charge of the Fire Service and they wanted someone to find out more about the station. I ended up volunteering whilst I was on holiday, in other words nobody else wanted to do it so I was bestowed the job. What at first seemed a long-winded chore began to be quite the investigation. I was collecting information from library cuttings as well as gathering other extracts by retired firefighters.

Some of the stories were extremely interesting like the one of the fireman who was a wizard with electronics, he set up traffic lights in the centre of the town which would change to green when the fire siren went off giving the emergency vehicle priority. Another story was of the same fireman, he was taken away by the navy to help them develop sonar for submarines during the war. It was eventually the penultimate piece of information that gave me concrete evidence on the date of the brigade forming. It showed detailed reports of a Local Board meeting in the Burley Gazette dated back to the 8th March 1873, giving the names of the people appointed as firemen. I ended up with so much information that I ended up getting a book published about the history of the Nelson Fire Brigrade.

Do you think that there is still somewhat of a blasé attitude towards fire safety?

Definitely. Unfortunately people only know their own experience of fire, which is usually a fire outside such as a bonfire or rubbish fire which bears absolutely no resemblance to a fire inside a building. Added to this, people believe what they see on television and on the movies, which more often than not is totally unrealistic.

In industry, many people don’t realise they are responsible for fire safety and must carry out fire risk assessments. There are more and more prosecutions being brought by fire brigades for fire safety offences.

Unfortunately, cuts to public services mean that resources are being reduced across-the-board, and fire safety departments are having to reduce the number of specialist officers. Fire brigades are also cutting back on training, resulting in less proactive ‘policing’ and more prosecutions after the fact.

It’s not all bad news, the fire brigades have been very successful in reducing fire deaths in the home by carrying out home fire safety surveys and installing free smoke alarms etc.

Are there any obvious improvements which you feel can be made for the benefit of fire safety?

Definitely. The most obvious way to reduce the danger from fire is to install sprinklers, even in domestic property. The Welsh assembly has recently passed a law requiring domestic sprinklers to be installed in all new homes, a very forward thinking and positive move. The benefits of sprinklers are enormous, where sprinklers are fitted, no one dies in fires, and there is a massive reduction in damage to property. Unfortunately, many people do not understand how sprinklers work, they often think when one goes off, they all go off. This is totally untrue.

Each sprinkler head has a heat sensor and will only operate when the temperature reaches in the region of 70°C. The next big misconception is ‘all that water damage’. The fact is that sprinklers will usually extinguisher fire in its early stages, with only one head operating. Yes, there is a little bit of water around, however this can be mopped up and you’ll back in business within a few hours. Compared to a building without sprinklers, the whole building could be completely destroyed. With sprinklers fitted, you effectively have your own fire brigade on guard 24/7. I have sprinklers fitted in my own home as I do not want to see my family burnt to death in a fire.

Do you have any important fire safety does and donts for our visitors?

There are far too many does and donts to list here. There is good advice on domestic fire safety on the government website: Fire Kills. There are a series of premise specific guides also issued by the government too: Work Place Fire Safety.

Is new technology helping to reinforce the quality of fire products or is there a danger in the future of over complicate things?

New technology is improving fire safety products such as emergency lighting and fire alarms. Also, new and efficient photoluminescent materials are being used for signage.

Fire sprinkler development, particularly in the domestic and residential arena has been steadily increasing. Sprinkler heads for domestic use are now concealed behind a small metal disc making them very aesthetic. New water mist systems that use much less water are also on the increase.

New technology such as lightweight breathing apparatus cylinders makes life for firefighters much easier. In my day, we had to carry relatively heavy steel cylinders on our backs, nowadays cylinders are lightweight aluminium with carbon fibre wrapping, making them extremely strong, but lightweight.

There are many other developments in technology making life easier and safer for firefighters carrying out their jobs.

Do you have any exciting plans for the future?

Additionally, if you need to buy fire safety equipment such as detectors, alarm panels, sounders & beacons then Direct Trade Supplies extensive range of fire safety devices are sure to bolster your fire prevention.